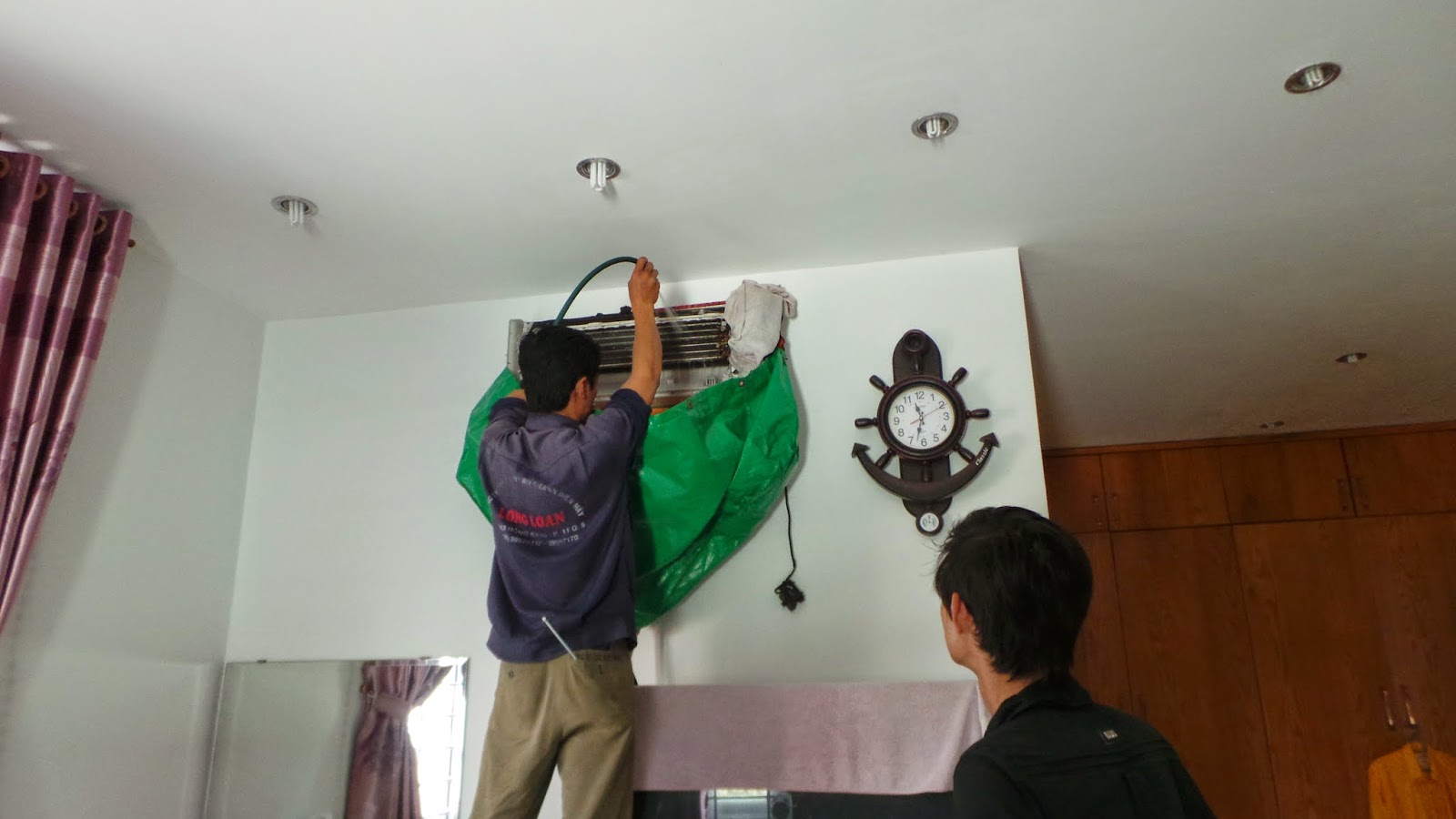 Vietnam may be a third world country, aspiring to be a developed nation by 2020, but I have observed that some of their workman's practices are quite novel and cost-effective.

Instead of dismantling the condensing unit for washing - and reinstalling it after cleaning - one of the mechanics used a simple canvas-made hopper with a drainage tube all the way to the toilet, and then used a compressed-air-powered water jet to clean the fins, as shown in the following snapshots.

Their small portable air-compressor was placed in the toilet, where the condensing unit covers and filter screens were washed separately by one of the mechanics.

In slightly more than an hour, the two mechanics could wash and clean four condensing units: one in my master bedroom, two in my personal library, and one in one of the extra bedrooms.

While living in Singapore, two Carrier mechanics often had to come to my house to dismantle the condensing units first, clean them, and reinstall after cleaning. They would often take almost half a day for their service contract work.

In Vietnam, the air-conditioning service costs less than S$5/- per condensing unit. In Singapore, with Carrier, it was S$50/-.

Interestingly, living in a third world country does have some good points. 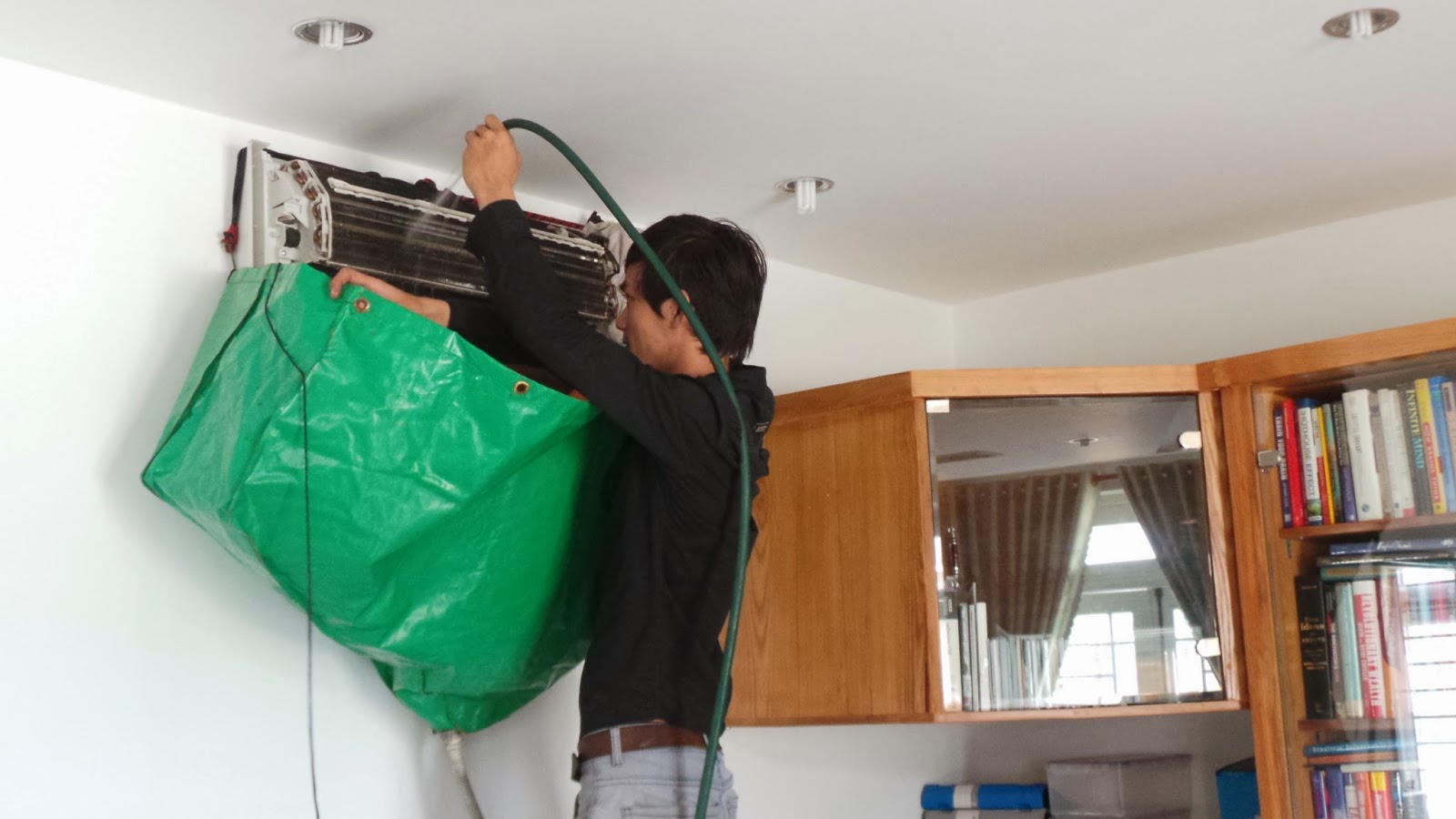 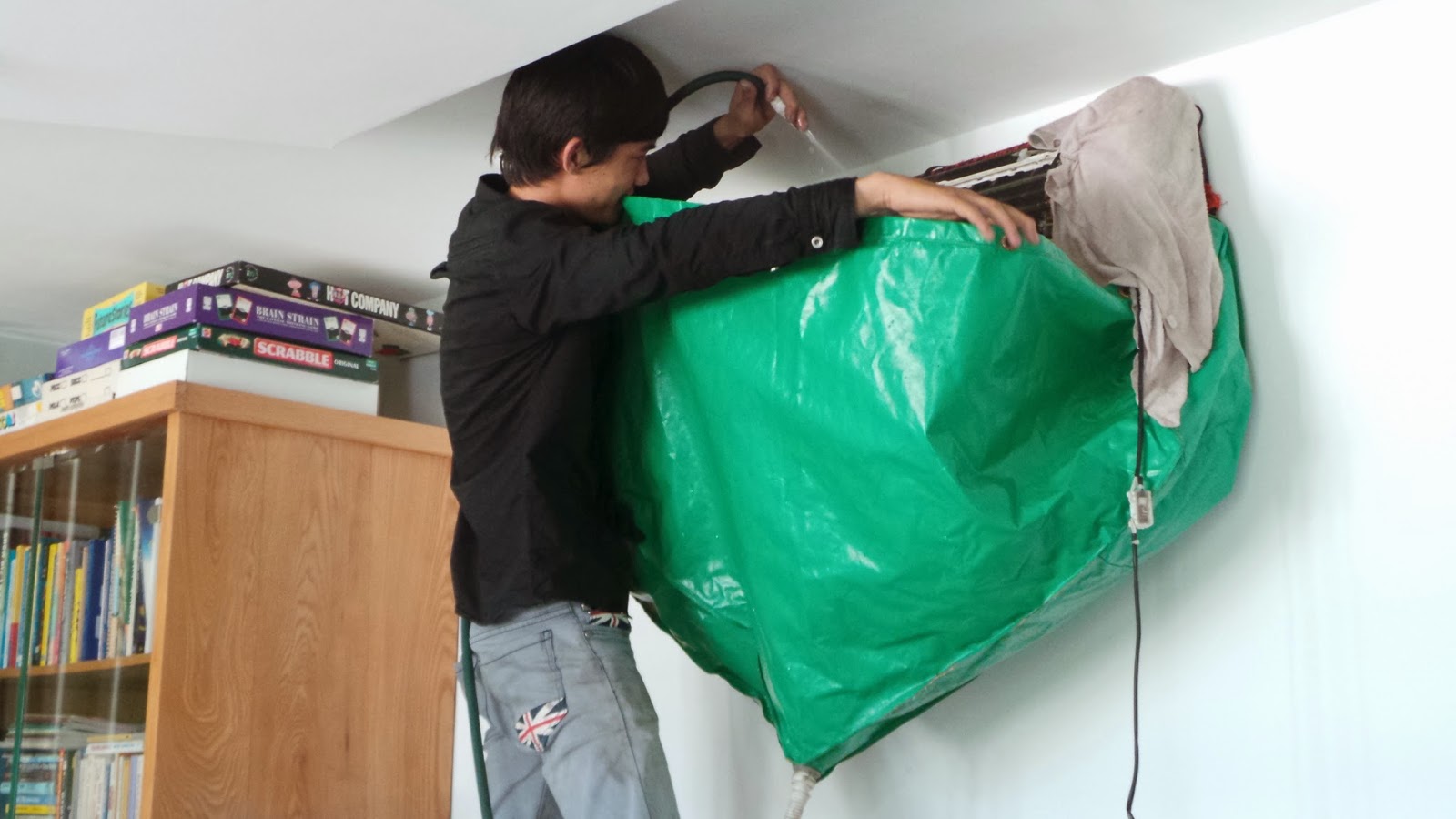 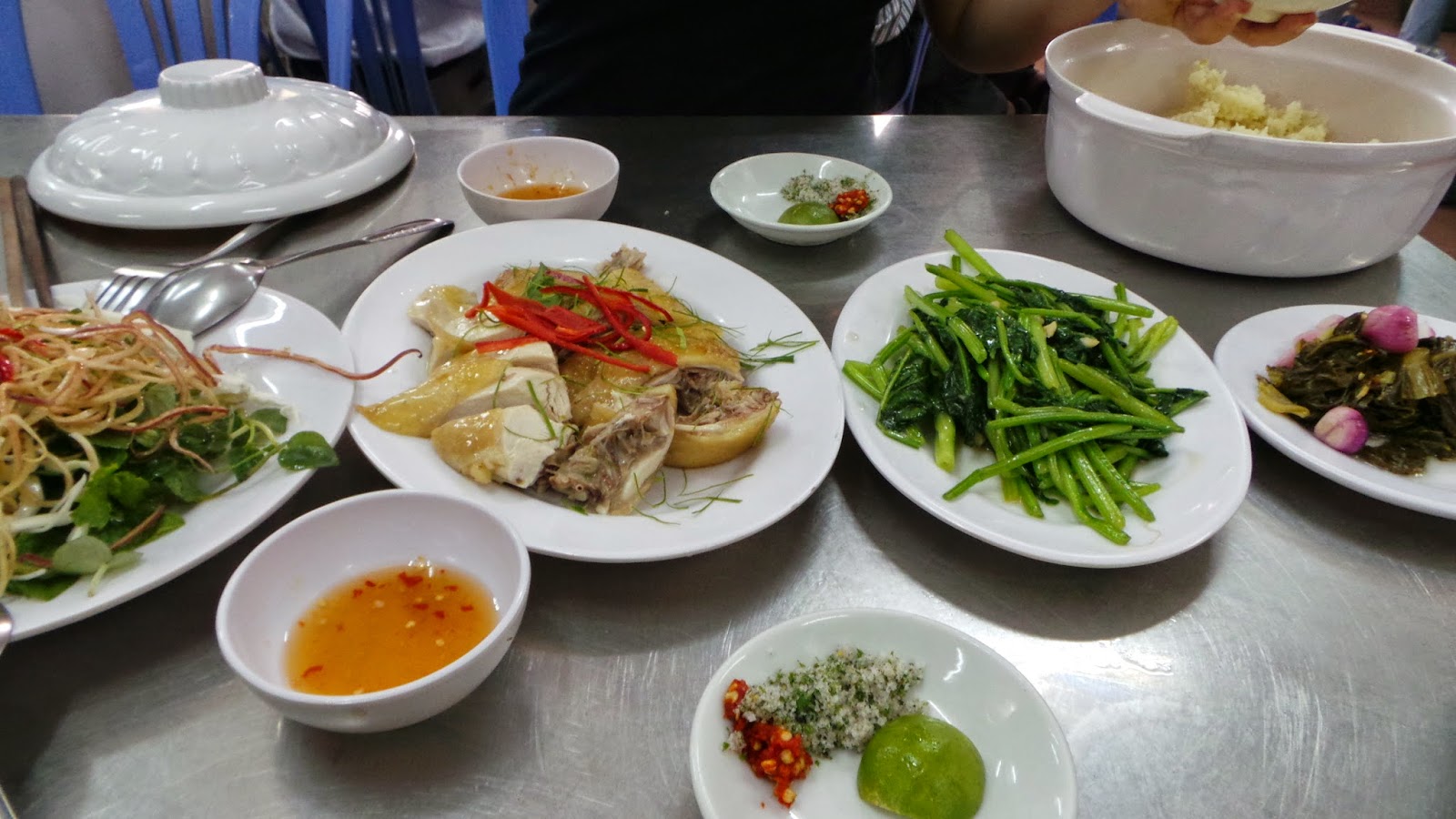 This is chicken rice, Vietnamese style.

Unlike Singapore's acclaimed Hainanese chicken rice, the rice is fluffy but only turmeric-flavoured.

Instead of fresh cucumbers and tomatoes, the local dish comes with a large assortment of fresh as well as cooked vegetables, as shown in this snapshot.

To my disappointment, what is lacking most when compared to Singapore's version, folks here don't get the luxury of the commonplace but mandatory ginger-garlic-lime-chilli sauce. Only chilli, with salt and pepper, plus fresh lime wedges.

Chicken is free-ranging, of the seemingly muscle-toned variety. Hence the meat is somewhat chewy. Folks here like it that way, but not me.

In a nut shell, Singapore's Hainanese chicken rice - which I miss most - has yet to surface in Ho Chi Minh City, according to my wife.

In most places around the world, it is generally believed that 'Location, Location, Location' is often the mantra of owners managing their retail establishments which depend on street crowds for regular patronage.

On the Nguyen Suy street, near its intersection with Tan Huong Street, there are two small, makeshift "banh mi thit nuong" (Vietnamese roasted meat sandwich) joints located on opposite side of the street.

One is seemingly heavily patronised with a perceptible queue, while the other has hardly any customers, as shown in my snapshots, while passing by one day to pick up a bite.

Yes, the mantra has its merits, but I think, a little bit of luck is more important. 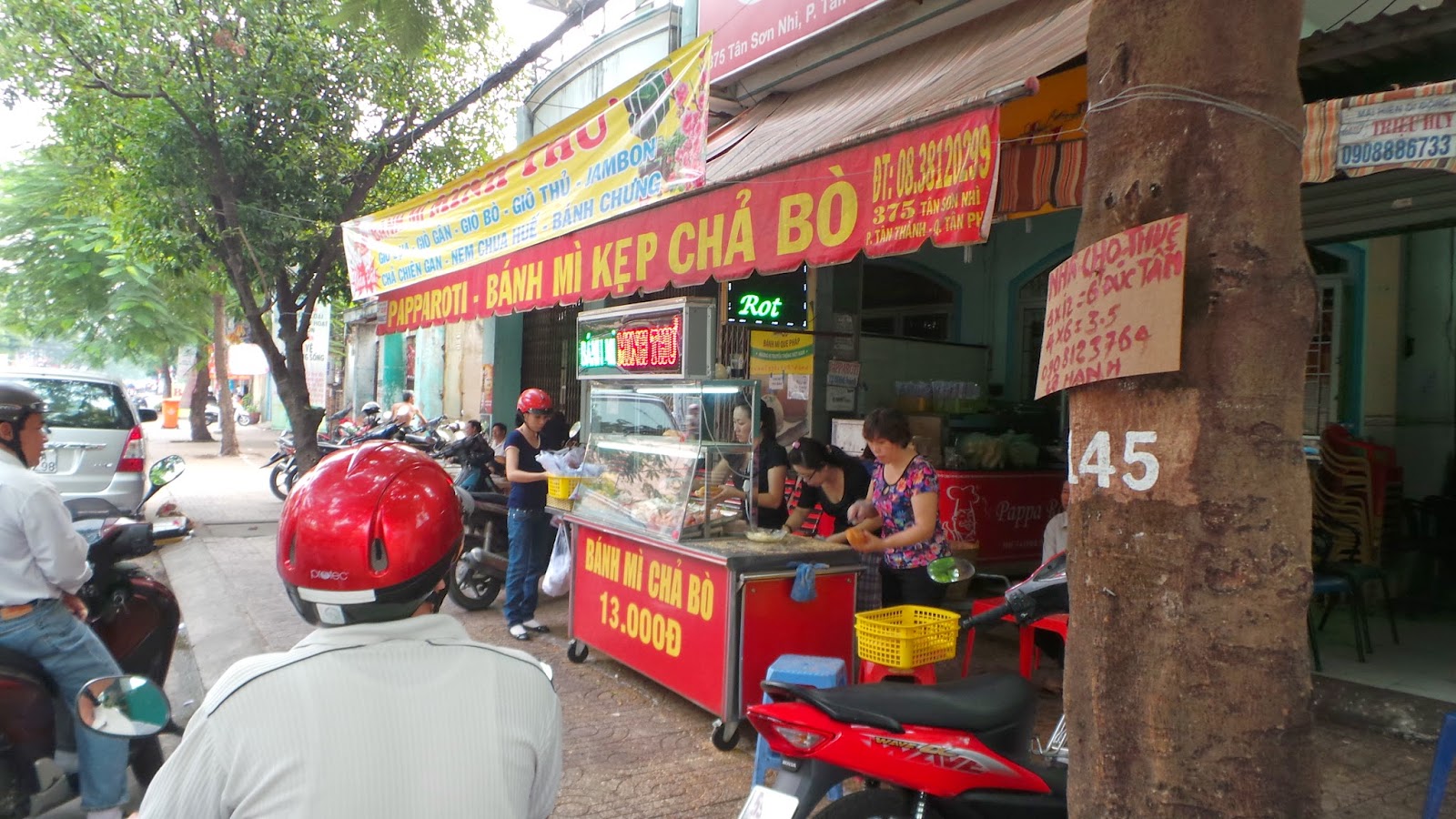 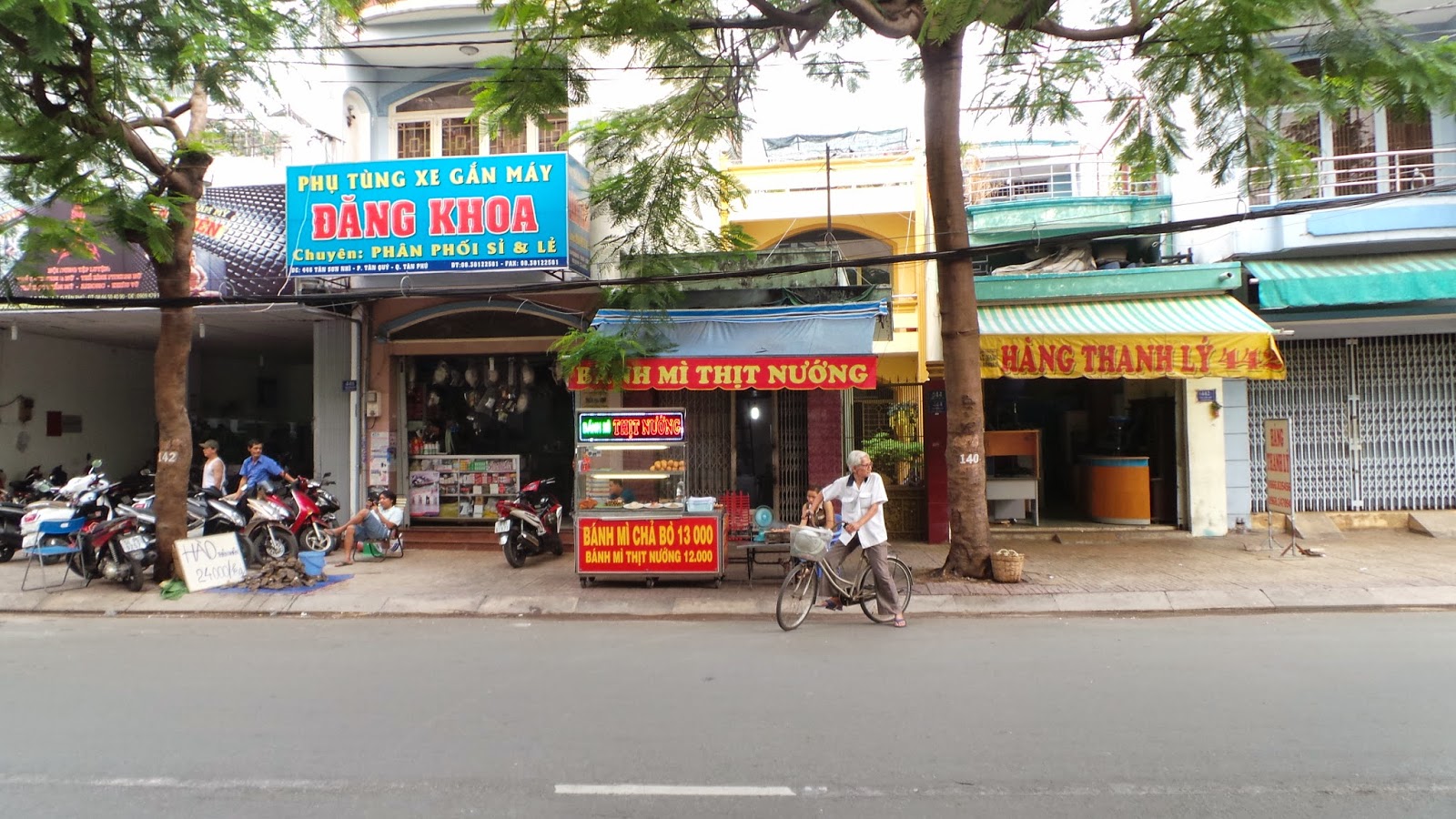 LIFE OF AN EXPAT IN HO CHI MINH CITY

"... I’ve seen Vietnam from a fair few angles, it’s not always been easy, or pleasant, but I’ve done a lot of growing up in Ho Chi Minh City, and despite the traffic driving me consistently insane, Saigon is home... "

~ James Allen, who first came to Ho Chi Minh City purely on a leap of faith as an English Language teacher, writing in the City Diary of TuoiTreNews, 18th June 2012;
Posted by SAY KENG LEE, KNOWLEDGE ADVENTURER AND TECHNOLOGY EXPLORER at 6/23/2012 05:56:00 AM No comments:

Email ThisBlogThis!Share to TwitterShare to FacebookShare to Pinterest
Labels: Expatriates in Vietnam, Interesting Observation, Life of an Expat

PASSIONATE QUOTE OF THE WEEK

“... I love foods, I loving eating it, I love creating it,... I feel like regardless what your background, your gender, your religion is, food is something everybody has in common, and I think food is what connects people together... ”


~ Christine Ha, 33, a blind Vietnamese-American contestant from Texas, who beats out thousands of others this month to nab a white apron on the hit TV show, MasterChef;

VIETNAM IS THE WORLD'S 2ND HAPPIEST NATION, according to NEF

According to the latest 2012 Happy Planet Index (HPI) of the New Economics Foundation (NEF), Vietnam is the world's second happiest nation.

“... Most people assume that women engaging in the sex industry do so because they are kidnapped, forced, or coerced into sex work. However, few studies have been able to furnish empirical evidence to support these claims.

When I began this project, I too was looking for trafficked victims and was surprised by the hundreds of conversations that I had with women who entered into the sex industry willingly... ”

~ Dr Kimberly Kay Hoang, in an interview with TuoiTreNews of 22nd June 2012;


[Notes: Dr Kimberly Kay Hoang, a 28-year-old Postdoctoral Fellow at Rice University in Texas, was granted the award for her PhD dissertation on sex work in Vietnam, which is based on 22 months of fieldwork between 2006 and 2010 in Ho Chi Minh City.

Her paper looks at the stratification of the sex industry, which is illegal in Ho Chi Minh City, which caters to international and local men. 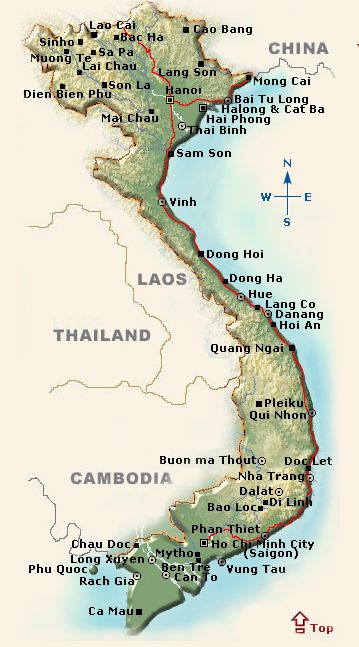